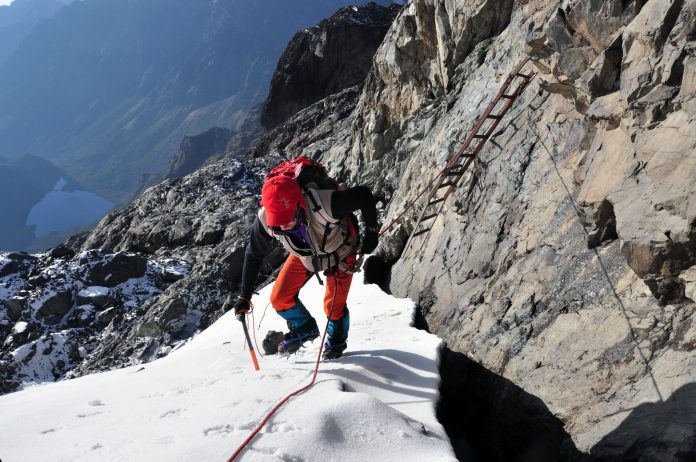 Looking for a remarkable adventure while on a vacation in Uganda, mountain climbing can be a great way to commune with nature. A number of travelers may get bored of the most common adventure experiences such as rafting and game viewing among others while on a Safari to Uganda but can find it charming by discovering wilderness areas that have come to a new adrenaline rush for mountain hiking and rock climbing.

Uganda offers a number features that allow hiking several hundred feet above sea level, giving those with a taste for the extreme the rush they are looking for. Besides hiking on the Rwenzori Mountains, other highlands in Uganda offer adventures that ain’t much different than simple hiking and all this can be experienced on different Uganda Adventure Safari packages offered by different tour companies. The only major difference is the endurance needed and the terrain you are hiking on, since over all the same gear is needed and the idea is much the same. Today, let’s share with you the top places to go for mountain hiking and rock climbing while in the Pearl of Africa.

About 1850 years ago, an Alexandrine photographer known as Ptolemy wrote of a snow capped mountain range deep in the heart of Africa, claiming it was the source of the world’s longest river, the mighty Nile. He named it Montes Lunae meaning ‘mountains of the moon’ but after a number of centuries, other explorers, researchers and mountaineers discovered that he actually meant the Rwenzori Mountain ranges.

Mountain Rwenzori ranges are found in the South Western Uganda on the border with the Democratic Republic of Congo. The name Rwenzori was derived from ‘Ruwenzori’, a local name that means ‘rain maker’ and it is ranked among the most beautiful and highest mountains in Africa, with glaciers and highest peak called mt Margherita on mountain Stanley, standing at an elevation of 5,109m.

It measures up to 110km long and 50km wide. It consist of six distinct mountains, Stanley (5109m), Speke (4890m), Baker (4843m), Emin (4797m), Gessi (4715m) and Savioa (4627m) and is managed by the Rwenzori mountains National Park. Each of these mountains bears their own crown of peaks. Its glaciers and snow peaks melt waters certainly representing the highest springs of the Nile as Ptolemy suggested.

Hiking up to the highest peak of this summit is a dream for many mountaineers around the world since it is ranked as one of the toughest adventures to face while in Africa.

Therefore, one must plan well before taking on this challenge as the conditions on the mountain that are always very cold at most times become challenging to even an experienced hiker. The terrain is also very steep and boggy and not less than a week is needed to reach and descend from mountain Stanley.

Therefore,Climbing mountain Rwenzori is truly a rewarding and great adventure and no worries of doing this alone. Climbers are helped by the local guides who know every trail on the mountain with porters that help with carrying the luggage.

Hike through the superb mountain scenery enlivened by equatorial snow and outlandish vegetation to make your mountain hiking adventure in Uganda much more memorable.

This is an extinct Volcano found in Eastern Uganda lying on the border with Kenya in the Mountain Elgon National Park. Its highest peak, Wagagai is elevated at 4321m above the sea level and situated on the Ugandan side, with the world’s largest Caldera that measures 8km in diameter with 40 square kilometers. Other peaks on the mountain include Sudek at 4,503m, Koitobos at 4,222m and Mubiyi at 4,210m.

It is believed that Elgon that is one of the oldest physical features of the world erupting first around 20 million years ago and once stood the highest in Africa, higher than Mountain Kirimanjaro’s 5900m. However, its height was reduced when an unusually violent eruption emptied the volcanoe’s magma reservoir and the cone no longer supported by underlying molten rocks collapsed inward to form the massive caldera on the Wagagai peak alongside millennia of erosion. Elgon is now the 4th highest peak in East Africa and 7th in the African Continet.

The mountain is locally known as ‘Masaba’ as called by the Local people living around, the Bagisu while the name ‘Elgon’ was named after the Anglicization of the Masai ‘El Kony’.

Unlike the Rwenzoris, Mount Elgon is open to everybody as it is not a difficult mountain to climb. Hiking the Elgon is rewarded with beauitiful sights and scenery around the Caldera and the peaks with a number of routes making it possible to ascend to the 4321m Wagagai peak. The routes used range from day walks to extended hikes over several days to reach the upper mountain with any trail choice taking you through interesting and unique flora & fauna, waterfalls, lakes, caves, gorges and hot springs among others.

Some of these routes include the Sasa Trail that takes 4 Days, providing the most direct route to the peaks, albeit with a stiff climb of over 1600m on the first day, Climbing Mountain Elgon following the 7 Days Sipi Trail  starts at the Forest Exploration center at Kapkwai, a few kilometers upstream from the Sipi Falls visiting the spectacular Tatum Cave hidden within extensive Forest.

Others include the Piswa Trail that also takes 7 days, starting at a higher altitude and following a more gradual route through podocarpus forests to the Caldera and the Suam trail that is the longest and least used route. The Suam trail starts at the Village of Suam on the Kenyan border crossing, following the Suam River through the Steep and spectacular Suam gorge to the hot springs on the Eastern side of the Caldera.

Full hiking circuit to the peaks of Moun tain Rwenzori takes 5 to 6 days to complete and you can make a Trans boundary adventure, ascending the Ugandan Slopes and descending on the Kenyan side however with an extra prior arrangement. You can also vary your hike by ascending from one trailhead and descending to another.

The Virunga massif not only offer incredible homes to the rare primates species of Mounatin Gorillas and Golden Monkeys but also good spots for hiking adventures. Uganda is one of the three countries hosting the Virunga ranges that are comprised of 8 active, dormant and extinct volcanoes.

From the Ugandan side, mountain Sabinyo is one of them together with Gahinga and Muhabura all located in the south western region along the border with Rwanda and Democratic Republic of Congo (DRC). The other six include include the Karisimbi and Bisoke of Rwanda as well as the famous active Nyiragongo, Mikeno and Nyamulagira of DRC.

The Ugandan side highlands of Sabinyo, Gahinga and Muhabura all offer excellent day hikes filled with some of the best views in Africa and can all be accessed via the Mgahinga Gorilla National Park, mounatin Sabinyo being the most preferred of all by the hikers.

This dormant volcano is elevated at 3645m and rightfully situated on the common border of Uganda with Rwanda and DRC. Mount Sabinyo is the most challenging of the three due to much more rugged terrain with many craters and sharp ridges. However, while on the top of it, it rewards you with a stunning view of all the 8 higlands making up the Virungas stretching across all the three countries.

Sabinyo derives its name from its three peaks which look like three spaced teeth, a local translation of ‘Old Man’s Teeth’. Hiking the Sabinyo is only possible on the Ugandan side and only takes a day with round trek taking about 8 hours, 4 hours to the summit and 4 hours back on average.

Mountain Muhabura that is elevated at 4127m starts the chain of the Virungas, with its longer hike to the summit taking about 5 hours. This makes it tough and sometimes coming down may also be a challenge as it takes roughly the same time. Mt Muhabura has a small crater lake at the summit that you can walk around while taking pictures for your memories as well as accessing different views of the other Virunga ranges.

Lastly, the Mgahinga or Gahinga is elevated at 3474m above sea level and is the smallest of the three and situated in the middle of Sabinyo and Muhabura. Gahinga is the easiest to hike to its top where you can also find a crater lake and has the shortest trek of all the highlands making up the Virunga ranges. 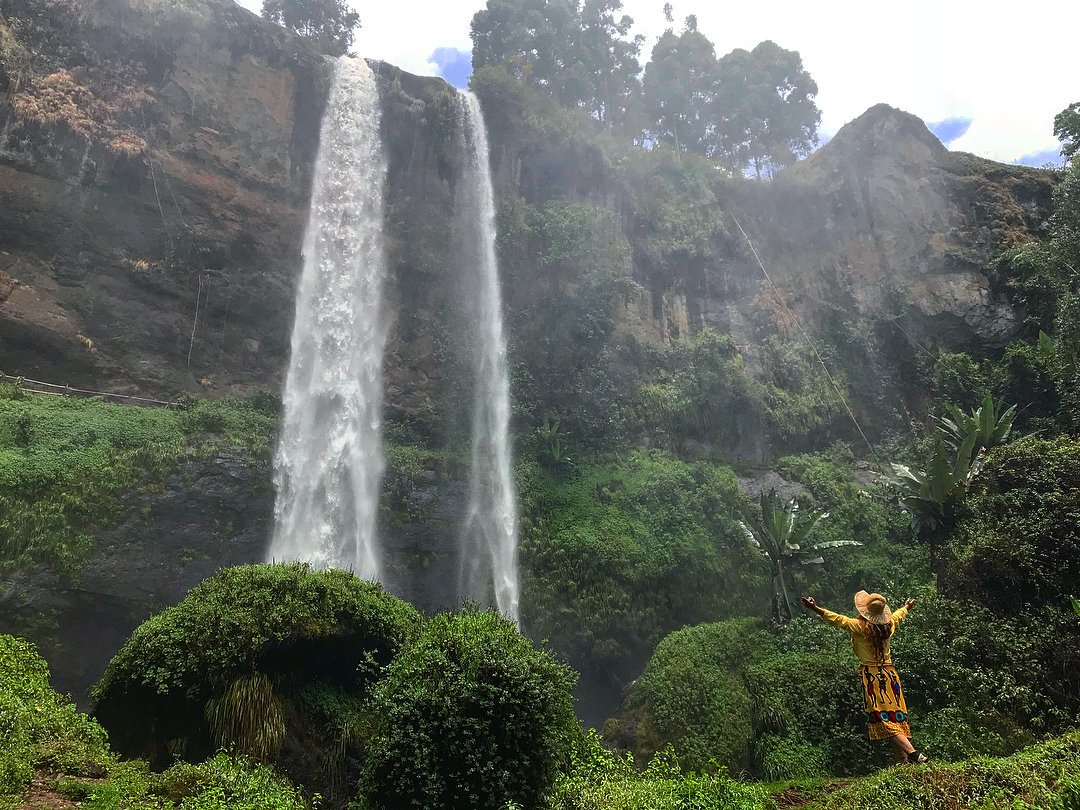 The Sipi Falls are situated along the foot hills of the famous extinct volcano on the Sipi River that flows from the hotsprings of the Mountain Elgon in Eastern Uganda into Lake Kyoga. They are named after the name of the Village, Sipi, where they are found in Kapchorwa district. The Sipi Falls are comprised of a set of three waterfalls each plunging over a cliff into pools below of different depths of 85m, 75m and 100m respectively.

Sipi falls have become one of the iconic attractions of the eastern region and many travelers visit the place for abseiling, rock climbing and to witness the outstanding scenery good for photography, . You can explore these majestic falls during a day trip, where a trek to visit all the three waterfalls covers a trail of about 7km or on a combined Safari with other adventures such as a 4 days River Nile and Sipi Falls Adventure. This can take an average of 3 hours to complete the trail.