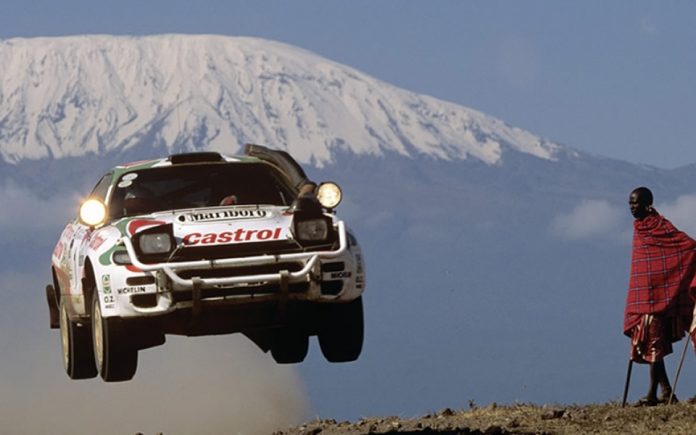 The Safari Rally is one of Kenya’s most popular sporting events. It draws multi-ethnic crowds from far and wide. During the event, some daredevils try their junks along rally routes oblivious of the danger they court as sports writers, renowned photographers and fun-seekers descend on Kenya every Easter to catch a glimpse of machines struggling through rugged terrain.

What makes the Safari Rally such a memorable event for many is the fanfare and pomp that sets the racing machines off the ramp at the Kenyatta International Conference Centre in Nairobi to various areas of the countryside. On this day, not only do senior Government officials turn up in full force for the colorful flagging-off ceremony, the young and the old come out in droves, to witness the ceremony live.

The Rally which previously covered the three East African countries (Kenya, Uganda and Tanzania) is a household name. To many Kenyans, it rekindles memories of renowned drivers such as Joginder Singh, Shekhar Mehta, Bjorn Waldergaard, Vic Preston Jnr; just to name but a few whose names have been synonymous with the rally event in the 1970s and early 1980s.

Kenya’s much feared Safari Rally is the peak after several small-time rallies run the year round. As part of the World Rally Championship, time and again it is a test of endurance and stamina for the competitors.

Indeed, it is regarded as the world’s most grueling and, of course, toughest motor rally among those classified under the World Rally Championship. World champions have fallen by the wayside, their awesome machines humbled, and unable to go any further. Only a few have completed the rally on their first attempt. And for those who do, it is points added to their WRC rating.

What makes it difficult are the rough roads that make up the route. From the delicate bridges in Kajiado in the heart of Maasailand to thin roads in the heart of the Rift Valley, Kenya’s rally route is most demanding.

A photojournalist was once said: “When you talk about the Safari without cars having mud, nobody will believe you”. Nevertheless, this is an understatement: The Safari Rally is unpredictable, mostly wet but some times very dry. Sections of the route demand very high speeds, in fact higher than it is the case in similar races.

“The Safari Rally today (is) a true battle of giants” says a brochure by the organisers of the Rally. But what was the origin of the competition? How has it developed over time?

This year, the event celebrated its 44th birthday, pulling the biggest number of entrants in 11 years: a record 86 drivers were registered.

The event dates back to 1953, when a ragtag motor rally was held to mark the coronation of Britain’s Queen Elizabeth II. Ironically, no overall winner was declared though 16 of the 57 starters finished. Volkswagen scooped two of the first three positions.

In 1955, the rally was organised under FIA rules; giving it an international appeal. The following year 78 cars finished – probably the highest number yet in the event’s history. In 1962, 35 non-East African drivers participated. Eight years later, the rally acquired its current World Championship status.

In 1960, it was named the East African Safari Rally. That year saw 25 competitors finish out of the eighty-four who started.

It continued to be run around East Africa with competitors from the three countries until political problems arising from the coming to power of Dictator Idi Amin in the early 1970s made it risky to venture into Uganda.

Another Kenyan, Shekhar Mehta, won in 1973. The following year, and for the first time, the event was held only in Kenya. Nevertheless, the Safari Rally maintained its status.

In 1979, Safari rally Limited was established to oversee the event, and for the first time Marlboro sponsored it.

Waldergaard and Hans Thorzelius, in a Toyota Turbo, set the record by winning the rally at first attempt in 1984. The following year, Finland’s Juha Kankunnen, at 26 years, co-driven by Fred Gallagher from Northern Ireland, became the youngest driver to win the Safari.

A move in 1988 to restructure the routes sparked dissatisfaction among rally fans and even drivers, who thought the event would lose some of the thrill it was well known for. The route was reduced and some rough sections – especially in Western Kenya and the Coast Province – withdrawn.

Despite this, however, some drivers still feel the rally remains the toughest. “It is the worst rally. But it is the best!”, quipped driver Miki Biasion, after winning the rally the second time in a row in 1989.

History was recorded in 1990 when for the first time an African, Patrick Njiru, broke the jinx over Group ‘N’ cars and finished the event in 8th position driving a maiden Subaru Legacy.

At this year’s event, Kenya’s President Moi suggested to the organisers that following the restoration of the East African Co-operation, the rally should revert to its East African status.

It remains to be seen whether this will be implemented as in the recent past, the world television audience has meant that the rally continues to shrink. The other handicap would be the extra expenses from a longer route.