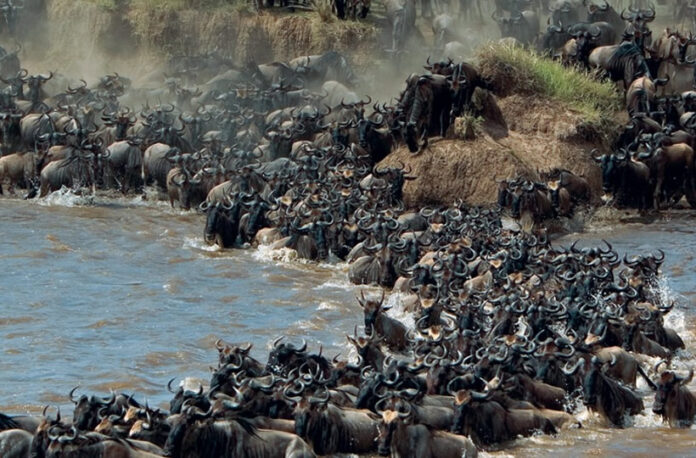 Wildebeest migration is a unique wildlife experience any traveler on a safari in East Africa shouldn’t miss out. It best described as the world cup of wildlife and also features among the seven new wonders on planet earth. Unlike other wildlife safari experiences, the wildebeest migration is an exceptional experience that occurs each year involving huge concentration of grazers about 2 million wildebeest accompanied by several gazelles, zebras traversing across the Northern Tanzania via Serengeti and Kenya’s Masai Mara Eco-systems while in search for pasture and water.

It is an immense wildlife migration experience which doesn’t occur anywhere on planet earth except only between Serengeti National Park in Tanzania and Masai Mara National Reserve in Kenya. The wildebeests cross the Masai River in Masai Mara which also inhabits crocodiles that are mainly prey on these creatures. However, it is such a dramatic experience you shouldn’t miss while on Kenya safari as these creatures try to cross over the River. Besides, the Masai Mara Reserve features a huge concentration of lions compared to any area on planet earth. The wildebeest are mostly preyed on by lions, crocodiles and cheetahs.

When does Wildebeest migration take place in Tanzania and Kenya?

In Tanzania, wildebeest migration takes place at any time of the year and short time migration occurs in Kenya especially around June, July, August, September, October. Around December, January, February and this is when most of them begin traversing to Serengeti National Park via Mara River between Kogatende and the Lamai Wedge. In March, most wildebeests are in the Southern side of Serengeti National Park in Tanzania mostly around Ndutu in the Ngorongoro Conservation Area. February, is considered the ideal time of the year and it guarantees you exceptional view over huge concentration of wildebeests as they confine around the Southern side for calving season.

Other months especially April, May and June the migration occurs in between. Short rains are usually experienced around November then April and May are characterized by long rains. During the rainy season the area becomes greener across Serengeti and few of wildebeest traverse compared to July, August, September, October and December, January, February, March.

Why does the wildebeest migration occur?

There are many reasons why the migration occurs. Firstly, because of following rainfall and calving purposes which usually begins in December, February, March. They start their cycle in the Southern Serengeti side of Ndutu. However, where they can be in the course of the year doesn’t solely depend on where rain falls. The wildebeest seem unreliable because they can cross from South to North Serengeti and back in what can be described as zig-zag pattern which makes it hard to predict where huge concentration can be at a particular period of time.

Where to stay on great wildebeest migration tour

If your plan is to immerse yourself in the wilderness of the Masai Mara National Reserve or the Serengeti National Park on the great wildebeest migration holiday, each protected has accommodation options for your night stay.

From January to March, the accommodation alternatives to spend a night include Lake Masek Tented Camp (budget), Ndutu Lodge (Budget), Mwiba Lodge (Luxury). These are perfect for visitors on Tanzania safari in Serengeti National Park.