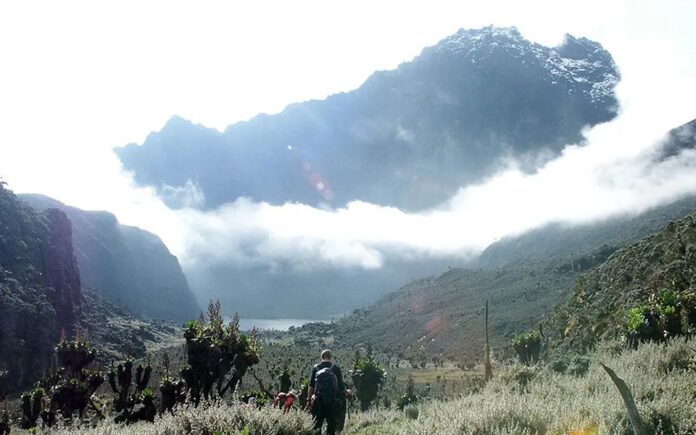 Trekking the mystic Rwenzori Mountains National Park in Uganda is a truly fantastic and unique experience, the wonder of the high glaciers, the beauty of the valley of nine lakes, the bearded lichen hanging from giant heathers with a backdrop of rocky cliffs, crags and snow capped peaks.

The wide variety of flora and fauna with several biospheres and during your Rwenzori Mountain Expedition, you will ascend through different vegetation zones creates the ultimate experience for trekking. Never before has this unique and beautiful trek been available, totally untouched and undoubtedly one of the most beautiful treks in the world.

The Rwenzori Mountains is a World Heritage Site and offers the opportunity to see nature at its best. The plant life varies from heavy tropical rain forest, bamboo forests, montane cloud forests to alpine vegetation and the scenery is truly spectacular.
Above 4,500 metres the snow and glaciers add that special dimension to the wondrous views throughout this pristine mountain range.

The Rwenzori range is a true mountain range with many climbs and descents and making it a tough climb however the scenery and beautiful vegetation are incredible.
The high rainfall of more than three metres per year, the moss covered rocks, the dense vegetation, the tall peaks and cliffs towering above to the moss covered valleys and meandering streams create a ‘Alice in Wonderland atmosphere’ which changes through several biospheres as you climb making the “Rwenzori Mountains” a truly unique experience.
Above is a view of the main peaks from Bamwanjara Pass which is between Camp 3 and Camp 4 on the Kilembe Route. On the left is Mt Stanley with Savoia, Great Tooth, Elena Peaks and just seen poking over the top is Margherita Peak.

In the centre is Mt. Speke and on the left you look over the ridge climbing to Wiesmanns Peak to see Mt Baker. The small prong or finger like rock on the ridge is McConnells Prong.
Behind the prong you can see the valley between Mt Stanley and Mt Baker. From where the photo is taken the trail continues down the valley or pass in the foreground past Kacholpe Lakes and Camp 4 before crossing the valley to Kitandra Lakes and Scott Elliott Pass.
You then climb to Camp 5 at 4,460 metres which is the top hut before climbing Margherita Peak.

The Rwenzori Mountains are located on the border of Uganda and the Democratic Republic of the Congo. Although the isolated volcanoes of Mt. Kilimanjaro and Mt. Kenya are taller, they are the highest range of mountains in Africa with the highest summit of Mt. Stanley reaching 5109 meters.

When the peaks were first explored at the end of the 19th century, there were six separate massifs that held glaciers on their flanks. At this point, the number has dwindled down to just three, with one of those holding only tattered remnants of its earlier glaciation.

Other Things to See in Rwenzori Mountains

Things to pack for your hiking safari in Rwenzori Mountains

How to Get to the Rwenzoris

Getting to Rwenzori Mountains of the Moon has two options-by road or air and by road, most safaris start from Kampala/Entebbe. You drive from Kampala take the Mubende-Fort Portal route or Kampala-Masaka-Mbarara to Kasese or fly to save time, setting off from Entebbe Airport to Kasese airfield.

Where to Stay During Your Safari in the Rwenzoris