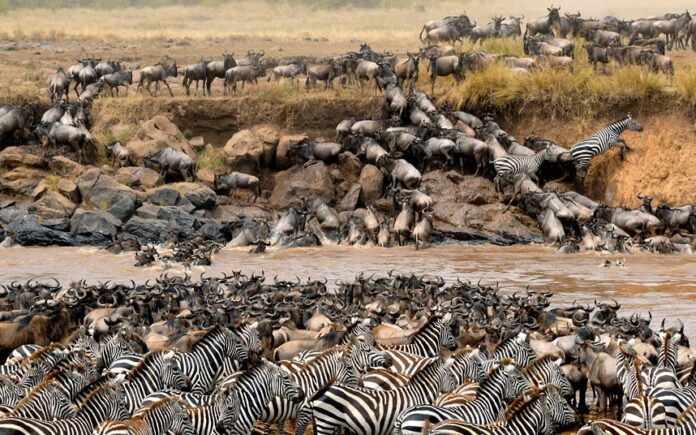 Tanzania’s natural endowment as a wildlife safari destination is unrivalled. Wild animals roam in vast areas as God intended on that sixth day of the creation. These areas are designated as national parks and game reserves and have a high reputation for being uncrowded and unspoilt. The magnificent collection of game sanctuaries to the north of the country, near the border with Kenya, is referred to as The Northern Circuit. This is the most popular and accessible wildlife safari route in Tanzania. I can positively say that this is one of the finest game viewing areas anywhere in the world. The game aside, the spectacularly diverse cluster of eco-systems and habitats is a dazzling experience for many a visitor.

The stars of the Northern Circuit are the Serengeti and Ngorongoro, very dear to the hearts of nature lovers. But no less sparkling and indeed complementing the two are the other members of the circuit: Arusha, Tarangire and Lake Manyara. In terms of wildlife, the abundance and diversity of the wildlife here is difficult to imagine. On top of the heap are the highly regarded “big five”: elephant, buffalo, rhino, leopard and lion. And then a wild array of plain animals: wildebeest, zebra, eland, hartebeest, oryx, reedbuck, giraffe, Thompson gazelle, and many more of the same genre. But do not forget the merciless predators: cheetah, wild dog, jackal, hyena and vultures. The Northern Circuit is an ornithologist’s paradise too, and over 500 species of birds are on record. On safari, you will be a witness of the shocking and fascinating dance of life and death on daily play by this combination of animals.

The starting point for northern safaris is usually Arusha town. The town sits near the base of Mount Meru and is in sight of mighty Kilimanjaro, Africa’s highest mountain. From Arusha, the nearest protected area to see wildlife is Arusha National Park, just 32 km away. In this park of 137 sq km area, you will see baboon, colobus and vervet monkeys, duikers, elephant, buffalo, giraffe, hippo, leopard, hyena, zebra and a wide range of antelopes. More than 400 species of birds have been recorded, including Eurasian migrants, who visit between October and April. One of the unique attractions of the park is that walking safaris are allowed and you can get off your vehicle for a nature walk. Due to its proximity to Arusha, the park is very popular for day trips.

Wildlife aside, Arusha National Park is a treasure with a rich tapestry of habitats including grassland, montane forest, heath and alpine desert and soda and fresh water lakes. Three spectacular features stand out: the Momela Lakes, Mount Meru, and Ngurdoto Crater. Mount Meru stands at 4,575 m and is Africa’s fourth highest mountain. It is however overshadowed by nearby Kilimanjaro, which rises above it by over 1300 m. It is regrettable that the snobbish instinct of many climbers makes them to overlook Mt Meru. The mountain can be scaled in three to four days with overnight accommodation in alpine huts.

The Ngorongoro Conservation Area, a UNESCO World Heritage Site and an International Biosphere Reserve, is located in the Great Rift Valley, a monumental fracture of the earths crust. The area is filled with volcanoes, mountains, plains, lakes and forests. Covering 8288 sq km, its main features are the Ngorongoro Crater, the Empakai crater, the Oldonyo Lengai Mountain and the archeological site of Olduvai Gorge. Olduvai Gorge is the prehistoric site where Dr. Louis Leakey discovered the remains of Homo habilis (“Handy man”) regarded by scientists as mankind’s first step on the path of human evolution. Be sure to have a look at the remains of our worthy predecessor, whose valiant industry spurred by necessity, got him making simple stone tools.

Unlike in the national parks, the colorful Maasai people, their livestock and wildlife coexist within the conservation area. The Ngorongoro Crater is the largest Caldera in the world that has its walls intact. The crater floor is a drop of 600 m and covers an area of 260 sq km with a diameter of 19 km. This magnificent natural amphitheatre is a stunning attraction in its own right and is one of the wonders of the natural world. The crater supports a year round resident population of a variety of wildlife. You will have no trouble spotting lion, elephant, rhino, buffalo and many species of plain animals- wildebeest, zebra, reedbuck, Thompson gazelle and many more. The crater floor is dotted with watering holes and holds almost 30,000 wild animals. Ngorongoro is four hours by road from Arusha or one hour by air. And from either Lake Manyara or Tarangire you will be on the road for two hours.

Lake Manyara National Park spreads between the cliff of the Great Rift Valley and Lake Manyara, a shallow soda lake. The park covers 330 sq. km, 70% of which is occupied by the lake. The varied ecosystem consists of ground water forests, acacia woodland and open grassland along the lakeshore and sustains a wealth of wildlife, including the Big Five -lion, elephant, leopard, rhino and buffalo. Other animals to be seen in the park include baboons, impala, giraffe, zebra, wildebeest, ostrich and hippo.

Lake Manyara is famous for the elusive tree-climbing lions, which can occasionally be seen along the branches of the acacia trees. It is also an ornithologists’ paradise and is host to over 400 species of birds. The water birds hovering around the lake include pelicans, spoonbills, Egyptian geese and hammerkops. In addition, migratory flamingoes arrive in hundreds of thousands creating a spectacular sight over the soda lake. You will arrive at Lake Manyara after driving from Arusha for two hours or flying for just half an hour.

Tarangire National Park is a one and half hour drive from Arusha making it very popular for day trips. Tarangire is a park of giant baobab trees, rolling savannah and acacia parkland. It is famous for its dense wildlife population, which is most spectacular in the dry season between June and September. It is during this period that thousands of animals- wildebeest, zebra, eland, hartebeest, waterbuck, giraffe, impala, gerenuk, buffalo and oryx migrate from the dry Maasai steppe to the Tarangire River in search of water. The predators -lion, leopard and others- as is the custom in the savanna follow closely by. If lucky, you will spot the peculiar tree-climbing python, kudu and roan antelope, a rare experience in the northern safari circuit. Birds are also abundant here and over 550 species have been recorded.

Serengeti National Park is Africa’s most famous wildlife sanctuary and Tanzania’s largest national park. The park is located 6 hours by road from Arusha or one hour by air. It lies in a high plateau between the Ngorongoro highlands and the Kenya/Tanzania border and almost touches Lake Victoria in the west. Appropriately named “endless plains” by the Maasai people, it features short and long grass plains, acacia savanna and woodland in parts of the north and east.

Within its 15,000 sq km area, Serengeti hosts 3 million large mammals. More than 35 species of plain animals- zebra, wildebeest, eland, giraffe, and others are found here. And so for the big five: elephant, lion, buffalo, leopard and rhino. The park is the staging-zone for one the most spectacular events in the natural world- the annual migration of wildebeest. This commences around June when over 1 million wildebeest, zebra and gazelle head for the Maasai Mara in Kenya in search of pasture. Following on their heels are the predators of the savanna- lion, cheetah, wild dog, jackal, hyena and vultures.

If you can spare the money, viewing the migration afloat a balloon is an unforgettable experience. The best time to view game is from December to May when the grass is short. Avoid late June-October, when most of the animals will have evacuated with the migration and are best seen in the adjacent Maasai Mara in Kenya. The keen ornithologist will have a good time trying to sight the 500 species of birds on record.

Camping sites can be found in the Ngorongoro Conservation Area and all the national parks of the northern circuit. Facilities are pretty basic and this is where budget travelers prefer to spend their safari nights. If you can afford it, overnight at the luxury safari lodges and tented camps. In this class of accommodation expect to find all the creature comforts associated with rated accommodation. See our Tanzania Hotels & Lodges page for info and book accommodation for your safari.

It is generally recommended to take an escorted tour package that includes transport, guide, park fees and accommodation. Tour guides have valuable useful local knowledge about the animals, where to find them and how to get where you are going. Check out our very good value escorted Tanzania Safari offers of various durations and budgets. But if you know the country well and have good knowledge of animals, then hiring a self-vehicle is an option. See our Tanzania Car Rental page to do your reservation for a self-drive or chauffer driven vehicle.

The relatively high elevation in northern Tanzania means that it never gets too hot. Indeed the nights and early mornings can be quite chilly. You are well advised to take along a heavy sweater and a windbreaker or jacket. Expect temperatures to average from 15°C in May to August and 22°C over December to March. The weather is best between June and September, but do not bet on seeing any animals in the Serengeti. For a safari covering all the parks of northern Tanzania, September to March is a good time. But remember that some of the other parks in the region offer nearly year round game viewing opportunities. April and May can be a challenging period for dong a safari for as this is when the weather is at its rainiest.

On safari, bright coloured clothing may get you in trouble with wild animals. If you are wise you will pack brown, beige and khaki clothing. Short sleeve shirts, shorts and trouser for men are adequate. For ladies, short sleeve blouses, slacks and skirts are ideal. Though the northern
region is well outside the predominantly Muslim coast areas and ladies do not have to dress too conservatively, modest attire is still a good idea. Remember to bring along a pair of sunglasses to shield you from the sometimes harsh tropical glare. Binoculars will come in very handy for spotting animals.