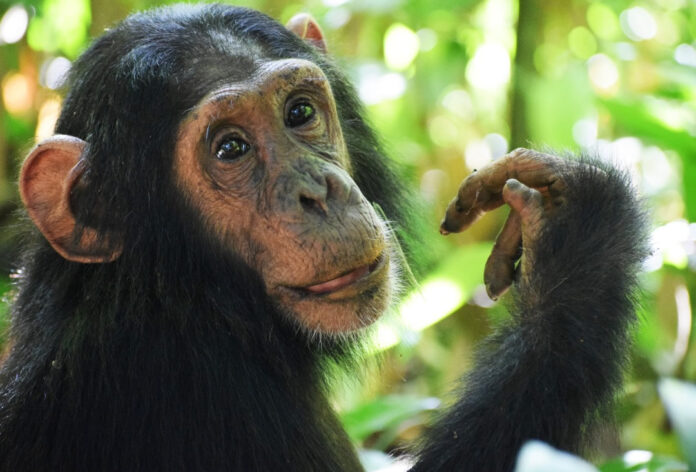 Chimpanzee tracking may get much less hype in the travel media than mountain gorilla safaris, but tracking our closest relative through the African jungle is in fact one of the world’s most thrilling wildlife encounters.

Although there are around 300,000 chimpanzees left in the equatorial forests of Africa, observing them in their natural habitat is a rare treat and one of the best places to do so is Kibale Forest National Park in Uganda as its home to five habituated groups that are within easy walking distance.

Chimpanzees live in communities of up to 150 members, which are divided into smaller subgroups and led by an alpha male.  They’ll typically spend much of their day high up in the treetops, grooming, sleeping, and feeding on fruit, leaves and bark. However, it’s when they descend from the canopy that you’ll have your best chance of getting close to them.

Kibale Forest in Uganda is home to around 1500 chimpanzees living in 13 communities. Of these, various groups have been successfully habituated; some for scientific study and others, such as the Kanyanchu group, are used for tracking.

Chimpanzees are not only close to us biologically, they are also quite near in intelligence and live in highly complex social groups. They are known for their great vocabulary of sound and body postures for communication with each other and you can hear their “hoo-hoo” calls carrying deep in the primate capital of Kibale forest.

Fruits lead their list of food items. These are supplemented by a wide range variety of other plants, as well as honey, termites and insect larvae.

On rare cases, chimps are fond of meat; piglets, monkeys and young baboons are preyed on during cooperative hunts.

It’s amazing how chimps get more intelligent with time; they use tools in their life just like humans. Grass stems are used to fish termites from their nests, while sticks are brandished to intimidate rivals during aggressive display.

Most visitors opt for the half-day chimpanzee trek, which should provide you with plenty of time to find the group and enjoy a thrilling hour in their company.  The adventure starts with a briefing, during which you’ll learn a little about the animals you’re about to see, as well as being given some dos and don’ts. Top of the list: avoid getting too close. Not only for your own safety, but also for theirs as our colds, viruses and diseases can easily spread to them due to shared DNA. It’s also not wise to imitate their calls. While it might seem fun to mimic them, if you’re not careful you might accidentally end up recreating a battle cry and bring 120 angry chimpanzees down upon you. Once you’ve been briefed, you’re separated into groups of up to seven, each accompanied by a guide, who is armed in case of emergencies. And then it’s time to head into the forest.

The Kanyanchu group is one of the largest and ready for trekking  made up of more than 120 individuals, is led by an alpha male named Totti (after an Italian footballer) who took the top job in 2016 after a two-year battle with the previous alpha, Magezi. Visits to the group take place in the mornings and afternoons and typically last 3-8 hours with up to one hour spent with the chimps.

If an hour isn’t enough for you, then the park also offers a habituation experience, where you’ll spend over 4 hours.

Only a maximum of 4 people per group inclusive of the researchers and guides are permitted to go see these Chimps. You are then taken to see the place where the primates built their nests the previous night. If you are lucky and awoke early, you are sure to find them just getting up. Thus a typical Chimpanzee habituation begins in the hours at dawn between 6-6:30 am.

You’ll need to be prepared for a fair bit of brisk walking – chimps can move fast – but it will be worth it for the rewards of a more intimate encounter.