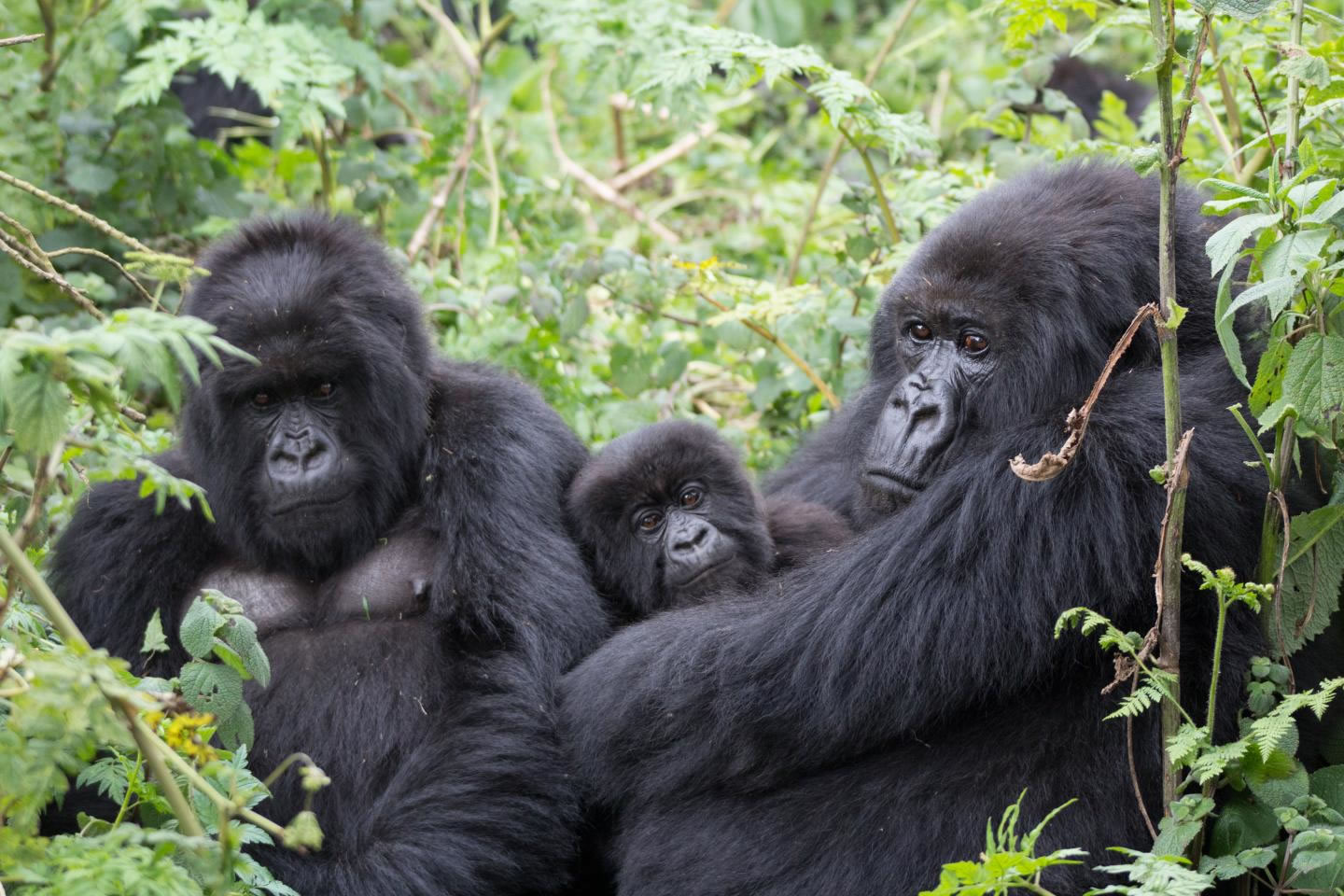 Gorillas like human are curious, they can be bored, bold, annoyed, have pleasure, excited, afraid, can worry, show affection, be thoughtful and they can be hostile. Gorillas like to study people to see if they are friendly.

Listed as one of the top 10 threatened / endangered species, there are only 655 species remaining. There are approximately 355 gorillas in the Volcanoes National Park and Virunga Mountains of Rwanda and Congo and another separate group of 300 in Uganda’s Bwindi Impenetrable Forest. There are no Mountain Gorillas living outside of their native mountain forest home. Gorillas are protected by international law. Capturing or killing gorillas and other endangered species is illegal.

Unlike chimps, Gorillas live in groups / families without territorial boundaries but with family’s range from 2 to 15 square miles. The females decide who they are going to allow into their family. If a gorilla wants to join another group and the females do not want her in, they will scratch her in the face and keep her out. If a female wants to leave a group to find a male she likes better, but the other females like her very much, they will grab her by the legs and not allow her to leave.

Gorillas feed on 58 different types of plant species, including stems, roots, leaves, flowers, thistles, ferns, tree wood and bamboo shoots. Gallium vines, fruits and celery are their favorite foods. Gorillas have much larger teeth in the back of their mouth than humans do so that they can grind foliage, bark and bamboo.

Gorillas like human are curious, they can be bored, bold, annoyed, have pleasure, excited, afraid, can worry, show affection, be thoughtful and they can be hostile. Gorillas like to study people to see if they are friendly.

Gorillas communicate by stomach rumbling which means they are contented, a pig grunt of harsh staccato grunts used when disciplining or complaining. A roar or scream is given when a gorilla is threatened. A loud hoot or roar is given when silverbacks are interacting. This is done by chest beating and thrashing of trees. When gorillas are afraid they send out a powerful odor from their glands.

Having endured decades of civil war in Central and East Africa, gorillas are confronted by the devastating consequences of increased habitat loss, poaching for the bush meat trade and the spread of dangerous diseases like Ebola. “These animals are Threatened” therefore make a tour to these countries to have a look at the few remaining primate giants before they are lost. Spend some time with them, they are awe-inspiring.

On this day, in the morning you wake up to a breakfast and then transfer to the park headquarters for the briefing before you set off at 9:00 am through the tracks to search for the humble giants. You have to go with packed lunch as the time taken to before meeting the great apes is un predictable. However the time ranges between 2-9 hours depending on the movement of the giant primates (Gorillas). The activity is tiresome, it involves walking along steep hilly tracks however encountering these great relatives of man erases all the poor memories/ hardships you went through in trying to find them.  They are awesome!

There are gorilla safaris arranged by several tour operators operating in Uganda, Rwanda and the Democratic Republic of Congo. On a gorilla safari you will learn more about these great apes that are found in Africa.