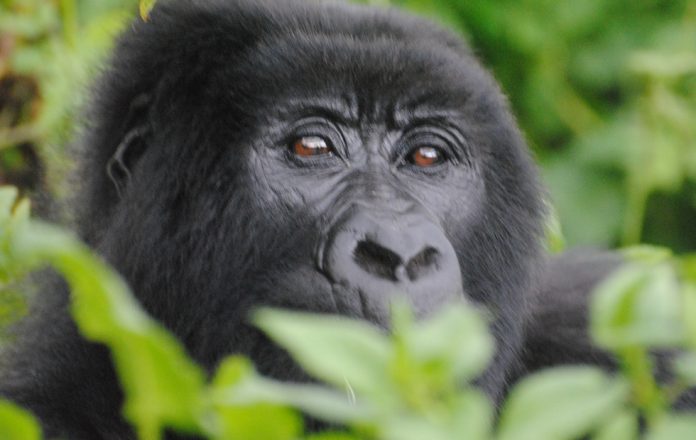 More than a century ago, southwestern Uganda’s species-rich Bwindi Forest, home to half the world’s remaining mountain gorillas (gorilla gorilla berengei) – was linked to the Virunga mountains by a strip of forest. The corridor allowed different groups of mountain gorillas to keep in contact. Today, however, the strip of forest has vanished and the gorillas now live in two isolated groups.

“Rwanda’s civil war has pushed tourism away from the Virunga Mountains to Uganda’s Impenetrable Forest. The International Gorilla Conservation Project, supported by WWF, is trying to promote sustainable development and ecotourism in Bwindi National Park.”

Around 320 gorillas live in 23 family units in the Bwindi National Park. They remain a huge attraction. Since the park was established in 1991, more than 3,600 tourists have visited each year. Their goal: to see the two most accessible gorilla groups. There is a one year waiting period for gorilla permits. The park authorities issue 12 permits, costing US$150 a piece, each day. The permits are sold worldwide, with two permits a day being reserved for sale into the Park to stand-by visitors. Demand is growing, and it appears that people would actually be willing to pay much more to visit the gorillas.

“If it weren’t for the gorillas, the area would never have been declared a national park,” observes Elizabeth Macfie, a former veterinarian who since last year has been the coordinator of the International Gorilla Conservation Programme (IGCP). IGCP is funded by WWF-World Wide Fund For Nature, Flora and Fauna International, and the African Wildlife Foundation. “But we have to stick to the tourist limit, otherwise it’s not ecotourism. At the moment, we don’t want to get more gorillas accustomed to tourists.”

For good reason. The threat to the gorillas grows when they loose their natural fear of the people. Last year, four adult and one baby gorilla were stabbed to death. The authorities suspect the poacher’s aim was to take the baby to sell to a rich private zoo owner.

Ten years of peace and stability in Uganda have reaped great dividends, with the country’s economy, conservation efforts, and wildlife all looking up. The country, described by Winston Churchill as The Pearl of Africa, was once rich in elephants, lions, hippos, antelopes and birds. But many species were decimated during earlier political regimes, and tourists tended to ignore Uganda in favour of its eastern neighbor, Kenya. Now, however, the country’s growing stability has brought conservationists and tourists from all over the world flocking to this beautiful region. “During the war, the military exploited the Park,” lamented Jacob Kitara, who for 30 years has been a ranger at the Queen Elizabeth Park founded in 1952. “They shot hippos and elephants, and sold the meat to the locals.”

But Jacob Kitara is once again a happy man. Over the last couple of years, the park’s elephant numbers have shot up from 150 to 700. There are 4,000 hippos. But there is still a long way to go: once the hippos numbered 7,000.

“Poaching is less of a problem than previously, but it has not completely gone away”, he added. “Some time ago, we caught poachers who had taken hippos, waterbucks, and buffalo.”

The gorillas and other wildlife might once again be generating tourism revenue, but there are other dangers on the horizon: unsustainable development.

Traditionally, local communities, used the rain forests for a variety of activities including hunting, pit-sawing, mining and cultivation. The forest has also provided people with medicinal plants, and materials for weaving and basket making.

More recently, the hilly slopes outside Bwindi National Park have been clear-cut, creating monstrous eyesores, as people in Uganda’s most densely populated area (233 people per km2) search for agricultural land. To get conservation more widely accepted, it is important that local people have a stake in projects. With this in mind, WWF and Uganda National Parks (UNP) have been closely working on a tourism development plan that could simultaneously contribute to the long-term conservation of the park and the socioeconomic needs of neighbouring villages. Under the scheme, 12 per cent of the gorilla entrance fees are to be distributed within “parishes” – groupings of 5-15 villages. The plan is to be implemented in all national parks in the country.

“We started with a pilot project last year,” explained coordinator Macfie. “US$50,000 will be distributed this year. The parishes vote on what the money should be used for – schools, hospitals, or roads. The sooner people see the benefit, the more they will work to preserve the park.”

The next step is to implement a similar tourism development plan in the 33 km2 Mgahinga National Park in the Virunga Mountain Range, whose flora and fauna are internationally renowned.

WWF is also supporting the Institute of Tropical Forest Research in Ruhija in the Bwindi Forest. The aim here is to have guest conservationists and other professionals train Uganda’s scientists and ecologists to conserve the biodiversity of the country. A major component of this programme will involve rangers collecting information in the forests while out on patrol. On the research agenda are crop raiding behaviour by baboons, the role of stingless bees as pollinators of forest trees, and studies of Grauer’s rush wabler, an endemic swamp bird. It is clear that these efforts to promote community participation in conservation, coupled with a favourable political scenario, offer Uganda its best chance in decades to turn round its once-bleak environmental situation, and revitalise its populations of gorillas, elephants, and hippos.