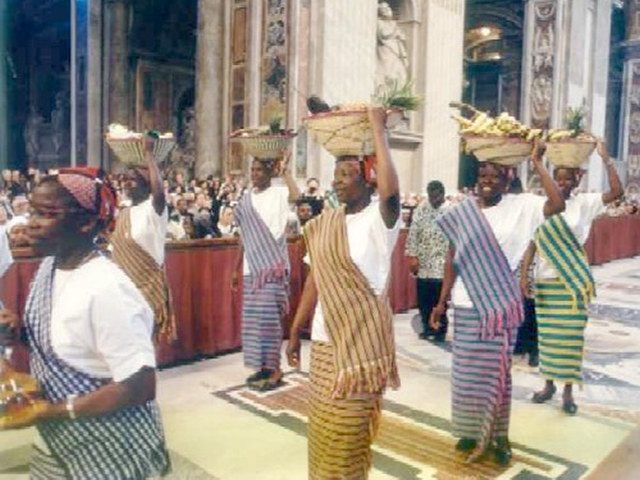 My experiences during a recent trip to the Nuba Mountains, in the heart of the Sudan where a civil war has been tearing apart the lives of the people for the last 10 years, are for me, a graphic exemplification of what the African Synod was all about.

I celebrated Masses in little roadside churches that looked very much like Nuba houses; built with stone walls and thatched roofs. Essential and cool inside, they could be the ideal dwelling place for a God who wants to be with the Nuba. The songs and the dances were unmistakeably Nuba. Yet the words, gestures and symbols used by the priest were from another culture, built around a logic, a rationality and a way of expression very distant from the Nuba: this is the problem of “inculturation”, which was one of the focuses of the African Synod. There is the need to give the Christian faith an African expression.

I dealt daily with problems of justice. The Nuba are victims of a little known genocide. They receive no international assistance, their situation is desperate. Only their strong determination to resist the oppression of the present Khartoum regime gives them the inner strength to continue their struggle. Justice and peace were the African Synod’s second major focus.

Seen in this perspective it is no surprise that the Synod caused an unusual debate for a church event.

From its announcement in 1989 until its convening in Rome in April 1994 and its celebration phase in Africa – Yaounde (Cameroun), Johannesburg (South Africa), Nairobi (Kenya) – the African Synod became a focus for hope and tension in the region where Catholicism is growing quickly. The demand for a consultation at continental level for the Church had been growing for decades. Theologians and Church leaders felt the need to confront the different challenges – poverty, tribalism, corruption, democratisation, external debt, dictatorial and military regimes. And the challenges from within, summed up by the word “inculturation”

The task was enormous and the expectations high when the African Synod (technically the name was “Special Assembly for Africa of the Synod of Bishops”) was held in Rome from April 10 till May 8, 1994.

In a month of intense work, the participants – 35 Cardinals, one Patriarch, 39 Archbishops, 146 Bishops and 90 Priests, plus some 52 observers – produced two documents: a message addressed to the whole church and a list of 64 confidential propositions submitted to the Pope for his consideration. Working on these propositions, the Pope, assisted by a commission , produced a document that was made public in September 1995. The document, titled “The Church in Africa” is a snapshot of the Africa itself, with all its hopes and failure.

Inculturation – which we could say is the process to give the Catholic Church in Africa an African face and soul, is a right and an obligation. From now on it will not be a matter of discussing if inculturation is possible, it will rather be a matter of the contents. Take how to celebrate the baptism enclosing the traditional African rights of child naming, or how to develop church administration and structures more consonant with African reality.

The Synod Fathers examined the external and internal causes of the injustices and wars. And they did not exonerate themselves. They said: “If the church should give witness to justice, she recognises that whoever dares to speak to others about justice should also strive to be just in their eyes. It is necessary, therefore, to examine with care the procedures, the possessions and the life style of the Church”.

Though the Synod and the Papal document did not really say anything new, it set a firm new common platform from where the African Church can start.

The Synod really marks the emergence of an African Catholic Church, with a bond of solidarity. African Catholics have at least two common points of reference: Jesus and the rich Catholic Tradition, and the African experience.

The future will reveal what the interaction between these two experiences will bear. The Archbishop of Yaounde, Jean Zoa, one of the bishops who took part in the Second Vatican Council and all the Synods of Bishops said: “After the Vatican Council we saw the local churches which most profited from it were those which already before had asked the questions and were searching for new pastoral solutions. The same will happen with the African Synod. As the Pope said, it starts now”.