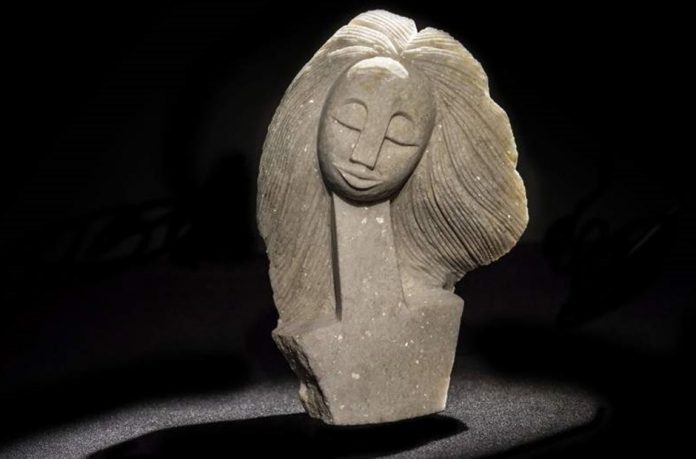 Zimbabwe is experiencing a surge of creativity in stone. In the past 30 years, mostly Shona sculptors have produced fine, authentic and essentially African works that have won international acclaim.

Zimbabwean sculptors have earned their rightful place among top artists in the world. Their work, set in an impressive variety of soft and hard coloured stone, does not only communicate messages and stories about the Shona culture, but conveys basic human feelings and experiences which transcend it.

The late Frank McEwen with an African Bateleur Eagle which he called “Chapungu” after its Shona name.

The flowering of Shona sculpture is associated with the late Frank McEwen, the first director of the National Gallery between 1956 and 1973. Committed to the development of the creative potential of the local people, he opened an informal artists’ workshop where they were encouraged to express themselves by drawing from their culture and instincts. In 1968, sculptors who showed potential were moved away from the city to Vukutu, an isolated place in Nyanga District.

Here, the first generation of sculptors emerged with Sylvester Mubayi, Bernard and John Takawira, Nicholas Mukomberanwa and Moses Masaya distinguishing themselves. In 1970, an exhibition of sculpture from the Vukutu community was held to high critical acclaim in Musee D’Art Modern Paris. Today, McEwen is fondly remembered by the artists for his faith in their artistic ability, insistence on originality and his guidance.

In 1966, another community of artists drawn from farm labourers was established in the north of the country at Tengenenge by Tom Blomefield, a tobacco farmer. Once again, unique talents surfaced: Henry Munyaradzi, Ndale Wilo and Bernard Matemera. Tengenenge is still alive today.

For a closer look at Zimbabwean sculpture, the artist and the creative process, we will focus on Bernard Takawira, a prominent sculptor whose work ‘bears the hallmark of international eminence’. The other Zimbabwean greats are Henry Munyaradzi, Joseph Ndandarika and Nicholas Mukomberanwa. Takawira is among the world’s best. He has travelled extensively abroad, to exhibit his work in the USA, New Zealand, Australia and several European countries. Each sculptor has a different style and perspective determined by both innate sensibility and personal experience.

Like his peers, Takawira never went to a formal art school. “Having no formal training gives me the freedom from rules and constraints that go with it”, he says. Inspired by a mother who was a potter of exceptional ability and a brother, John, who was also a prominent sculptor, Takawira took up stone carving with a strong artistic background.

For him, creating a piece of sculpture is a spontaneous act, uncluttered with drawings or measurements. He personally chooses stones from a quarry, thereby establishing a bond with them. He handles them with respect just like living matter. Takawira prefers his stones hard, “because there is an absolute finality about every movement in stone carving, the harder stones put up more resistance which gives him more time to determine a final form.” He only uses hand tools.

Takawira mentions three ways in which he creates his sculptures.

“Firstly, I have a clear image I feel compelled to sculpt. I then try to find a stone which suits that image. Secondly, when some stones come from the mountain or quarry they are already sculptures. I need only do very little to realise the image. Thirdly, at times I find myself working on a stone as though guided by an inner feeling – then I must be submissive. These works often invite criticism but it is better to follow one’s instincts than try to please everyone”.

He produces three dimensional sculptures of varying scales. One of his earlier pieces The Baboon Man (1970), carved in dark green mottled serpentine is only nine inches high. With an enlarged head, it stands at attention. It is a piece from which its late owner, Frank McEwen, said he was able to draw “courage and inspiration”. Other smaller works, include pieces such as The Right of Opinion (1990). It has a narrow base from which five human faces emerge in flowing movement and different directions. Some pieces are much larger, produced in series over a number of years like The Strange Development of Woman (1991-93). Through this series of five large pieces, Takawira documents the emancipation of women from a position of total submission as depicted in Only to Be Sat On (1991 springstone), to one of power when the emancipation has gone too far, as depicted in The Man Has No Feet. The woman has become no better than the man she is overpowering.

What is it that Takawira communicates through his sculpture? The few pieces mentioned above show that he is very much aware of a society in transition in which women are gradually gaining power. While he applauds this development as in his piece Polite But Strong, he is a little sceptical about the end result. His last piece in the series The Man Has No Feet serves to warn us of the possible disastrous consequences inherent in this kind of development process. The Right of Opinion shows that the sculptor values the diversity of opinion in resolving problems. He is imparting a message relevant to (African) countries seeking democratic institutions. He also expresses a wide range of human qualities such as patience, sadness, confusion, tenderness, humility, dignity, and innocence. Some of his pieces that belong to this category are Innocence, The Inevitable Two in Every One Man, Confused Boy and Patiently Waiting.

Stone sculpture has brought fame and financial reward to the sculptors. There is an inherent danger in this – commercialisation. Their success is coveted by many. Mass produced sculptures – ‘airport art’ – can be seen throughout Zimbabwe. Some of these are poor imitations of the serious work of prominent sculptors.

Zimbabwe stone sculpture needs to be protected. Promoters like Roy Guthrie of Chapungu, a sculptural centre committed to creating awareness of the enormous cultural contribution the sculptors are making, are helping a lot in this. They inform the local and international audience of the established and gifted upcoming artists through publications, exhibitions and artists’ residence programmes. The protection is laudable because Zimbabwe Stone Sculpture is making a valid and meaningful contribution to contemporary artistic expression. “The sculptors have a lot to teach us, already. The next century must be Africa’s – in conflict or in harmony; there is just a chance that the profound,

Special Acknowlegement:
For all the black and white photographs used, we express our sincere thanks to Roy Guthrie, the Director Chapungu Sculpture Park, the main Harare gallery promoting Zimbabwe stone sculpture.

peaceful and spiritual values that the best of Zimbabwean art enshrines, may help to lead Africa to rest in its own soul, its own spirit and lead world art back to the realm of the spiritual where it belongs.” (Michael Shepherd 1990 – pp 23)