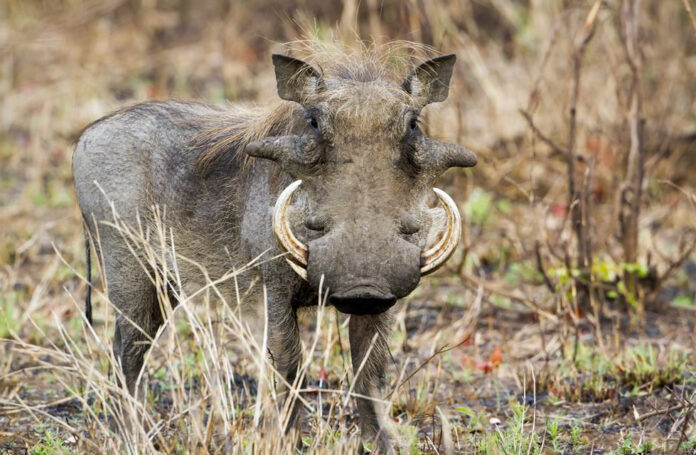 In Africa everyone knows the Big Five; those animals considered the most difficult and dangerous to hunt and the most exciting to watch – but sometimes they just aren’t around. So, when the big boys aren’t playing fair, you can always watch out for the members of the exclusive Ugly Club – the underdogs only a mother could love, although whether they all belong there is open to debate.

His love of wallowing in the mud or having sand baths doesn’t help his appearance and his bristles need a good shampoo and conditioner but he is quite a character. The fierce looks belie a fairly placid temperament. The warts are for protection when the males are fighting and the tusks help with foraging. He prefers to run than fight, youngsters following behind in a line, tails in the air.

The wildebeest, immortalised in the Flanders and Swann song, I’m a gnu, really does look as if it’s made from spare parts – a buffalo head, antelope body and horse’s tail. The large head and heavy front end are out of proportion to the slender hindquarters and spindly legs. One term for a herd of gnus is an implausibility, an apt description. There are two in a small area of the park that also appear to be intellectually challenged. They don’t seem to know they should be in a herd and instead hang out with zebras, impala and puku.

The other members of the club are all scavengers. We might find their looks and feeding habits repulsive but they are the biological waste controllers, clearing up after others.

Associated with African myth and folklore, the hyena’s reputation as a backstabbing opportunist often gets him a bad rap. His sloping back and short hind legs add to the negative image of a permanently skulking creature. He prefers to scavenge rather than hunt and has the strongest jaws on the continent. The only parts of a kill not fully digested are hair, horns and hooves.

Vultures are the villains of the piece; ugly, squabbling, filthy harbingers of death. It’s true that when vultures are at a kill it’s every bird for himself but they don’t circle dying animals waiting to cash in. They soar on thermals looking for their next meal.

Like the marabou, many have featherless heads and necks which prevent bacteria and parasites burrowing into their feathers and causing infection due to feeding on rotting carcasses.

The marabou stork is also known as the undertaker because of his cloaked appearance from behind, his long skinny legs and tufts of white hair. He has a bare head and neck and a distensible pouch. He stands around a lot and has the particularly unattractive characteristic of defecating on his legs which gives them a whitish colour.

In terms of ugliness, he should take first place.