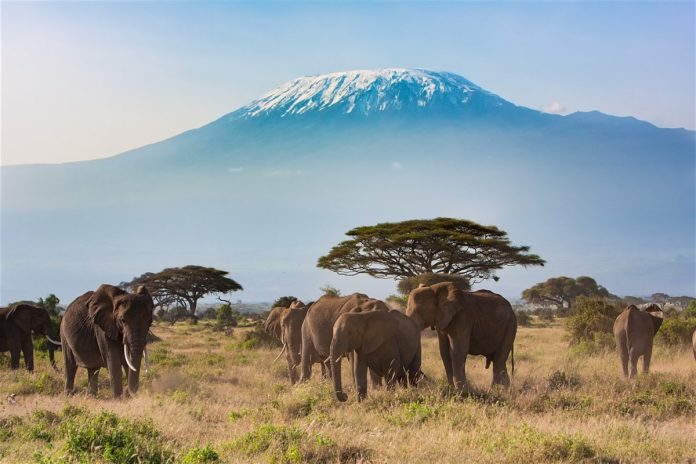 Kenyans often seem to take it for granted when visitors to their country remark that it is a land of exciting physical beauty. It is one thing to hear about the contrasting landscapes that attract and amaze visitors to Kenya, it is quite another to experience them for yourself. For instance, no amount of colourful description can prepare one for the breathtaking majesty of the escarpment as seen from the Nairobi – Nakuru road. Similarly, the contrasts of the Amboseli National Park are impossible to imagine because even when seen first-hand, they are unbelievable.

The Amboseli is probably the most visually impressive of Kenya’s National Parks. Set in south-east Kenya on the border with Tanzania, the park lies in the shadow of the snow capped peak of Africa’s highest mountain, Kilimanjaro (5,895 metres). Amboseli covers an area of 392 square kilometres.

“Kili” as it is fondly referred to dominates the landscape of the park and is a favourite with amateur photographers , many of whom try to capture animals such as the numerous elephants or giraffes standing against the backdrop of the mountain , for the picture of a lifetime.

As well as the big game, there is the scenic beauty of the park which consists of five basic wildlife habitats covering the open plains. There are areas of yellow barbed acacia woodland; rocky patches where nothing seems to grow; swamps and marshes; huge dusty plains reminiscent of a desert; and some savannah-like stretches of land.

I visited the park recently, courtesy of Wildlife Safari, one of Kenya’s leading luxury tour operators, and stayed at the 23-year-old Amboseli Serena Lodge. Neither of these were around in the days when the likes of Ernest Hemmingway and Robert Ruark wrote and set stories at the foot of the great Kilimanjaro, but one could understand their inspiration.

Driving through the park, after travelling 260 kilometres from to the border town of Namanga and then turning left into the Amboseli area, my travelling companions and I were immediately struck by the stark aspect of the park and wondered whether animals could really survive in what seemed to be a great huge dust bowl, for very long.

Shortly, we were driving through a literal dustbowl, and driver Abdul informed us that it was a dried up lake bed, giving us an eerie impression of what the lake might have looked like with water in it.

Suddenly there was sparse grass and we were out of the dried up lake into the almost savannah-like plains of the park and here we could see the occasional antelope and wildebeest or gnu.

Further into the park as we approached the built up area, where the various game lodges including the Amboseli Serena are located, the landscape changed yet again. This time, on one side of the road there was a lush green swamp with elephants and zebra cooling themselves off in mud baths; on the other side of the road, it was a brown, dusty desolate desert. The difference was unbelievable.

Later we discovered that the sharp contrasts in the landscape were due to its being a very fragile ecosystem.

According to a booklet from Wildlife Safari, the swamps and springs which provide the permanent watering places for the park’s animals, are fed by underground rivers created by the melting snows of the mountain.

Meanwhile, by some freak of nature, the changing climatic conditions of the park, the rising water table and an accompanying increase in soil salinity have combined to create the large expanses of the desert we saw in the park.

The increase in elephants, though a plus for elephant conservationists, is not such a great thing for the park.

The pachyderms which have been drawn in great numbers to the park by the protective sanctuary of the swamps and marshes, have in their wake wreaked havoc on the little vegetation there was, uprooting and/or pulling down trees.

In recognition of this factor Wildlife Safari and the Serena Group have come together in probably what is the most ambitious project of its sort in Kenya. The aim of the Amboseli Reforestation Project as the name implies, is to reclaim the dry empty plains by planting trees on them. One million acacia, and other indigenous tree species are to be planted during the next 30 to 50 years.

How does it work? Wildlife Safari provides a per passenger funding contribution towards the purchase of acacia trees and the payment of the labour employed to look after the trees. Serena Lodges and Hotels provide the infrastructure and the labour supervision for the Kenya Wildlife Service approved project.

Every Wildlife Safari passenger visiting the Amboseli is invited to plant an acacia tree in a designated area protected by an electric elephant-proof fence (elephence). At the end of the tree planting exercise each person who plants a tree is presented with a signed certificate as a memento of their contribution to conservation.

The citation on the certificate reads, “Wildlife Safari and Serena Lodges &amp Hotels have joined forces in one of the most ambitious conservation projects in Kenya. Our aim is to plant 1,000,000 acacia trees, together with other indigenous species in the Amboseli National Park. This is a long term commitment from both organizations and the project will take between 30 and 50 years to complete”.

Of course other guests at the lodge who may not have travelled there with Wildlife Safari are also free to plant trees. All they have to do is inform the reception desk of their wish to plant a tree during their stay and the matter is arranged. As for donations to the tree fund, guests can hand over cash to the lodge’s cashier and get a receipt for it. Guests’ donations go to the purchase of seedlings, watering the trees and maintenance of the elephence and the workers.

The Amboseli Reforestation project offers tourists the chance to get involved “hands dirty” as it were, with a conservation project whose endearing quality, other than the fact that it is ecologically sound, is its simplicity.

Wildlife Safari have produced a 10-minute video titled One Million Friends describing the project. Copies of the video are available for a donation of US$10 (Ksh 550) including postage from Wildlife Safari offices in Kenya, Australia, the U.K., the USA. or Chile.

The Amboseli Serena Lodge is difficult to see from far away as it is cleverly camouflaged by bushes and acacia in a near perfect imitation of a Maasai manyatta (homestead). The illusion of a manyatta is shattered, however, by the 96 ensuite bedrooms, the swimming pool and the other “modern” amenities that one would not associate with a traditional manyatta.

Our two-and-a-half day trip with Wildlife Safari meant leaving Nairobi at about 8 am and driving south across the Athi Plains, via Athi River and Kitengela townships, through Kajiado and Namanga and into the park, arriving at the lodge just in time for a hearty buffet lunch. (This costs Ksh 970 ($17.63) for those who may just be driving through the park and stop at the lodge for lunch before returning to Nairobi or going elsewhere. If you are a guest at the lodge overnight, it goes on your bill.)

After lunch, we had a two-hour siesta until about 4 pm when we went for an afternoon game drive returning to the lodge in time for pre-dinner cocktails and dinner itself.

The game drive in the brand new Wildlife Safari customised mini-van seemed catered for our every need. There was a large photographic roof hatch, spare binoculars, an assortment of bird and animal field guides as well as a first aid kit. Abdul was very pleasant and knowledgeable, about both the flora and fauna of the park and the culture, history and geography of the area we were in. The firm also operates a small fleet of custom designed four-wheel drive vehicles.

For dinner on both nights, there was a choice of the al a carte menu, or the lodge’s Special Feature – a barbecue dinner in the bush within the lodge grounds but safe from the wild animals, though close enough to catch glimpses of them heading to the nearby stream to drink water. The barbecue experience sets guests back Ksh 2,000 ($36.36), but for the thrill of eating in the bush and being entertained by traditional Maasai dancers, it seemed worth every penny.

The next day we awoke at the crack of dawn and went for another game drive before breakfast. On this drive we managed to spot all of the big five: lion, elephant, buffalo and rhino save for the cheetah. Later after lunch we went on our last afternoon game drive and visited the observation point at Noomotio where the view of the park and Kilimanjaro are spectacular. We returned to the lodge for a quiet evening, had dinner and prepared to leave early next morning for Nairobi and home. My companions, an Italian trio, were going on to Lake Nakuru and the Maasai Mara, so we parted ways in Nairobi.