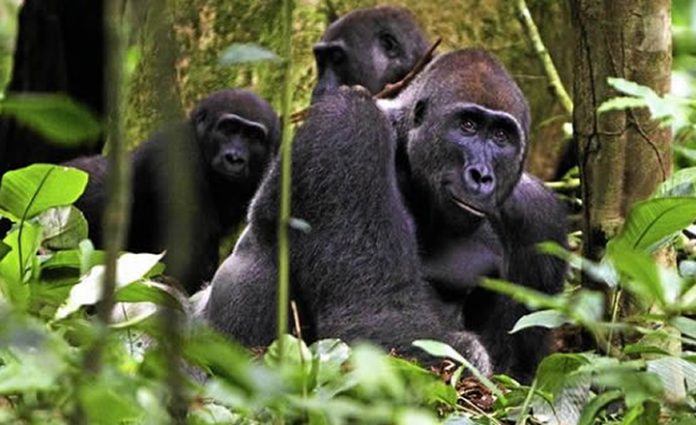 The pristine beauty of the Cross River State’s lush, tropical rain forest is accentuated by the River Cross snaking through. The river flows from Cameroon through four Nigerian states (Cross River, Enugu, Abia, and Akwa Ibom) before washing into the Atlantic Ocean. Sadly, this is not representative of Nigeria’s forests. Ninety-five per cent of its forest cover is already gone. Cross River State still has some rain forest left. In fact, 40 per cent of what is left adds up to some 6,000 km2.

In 1991, the Nigerian Government established the 4,000 km2 Cross River National Park (CRNP) to protect the state’s unique natural resources. Apart from the tropical rain forest, CRNP is home to the endangered western lowland gorilla, chimpanzees, red bearded guenons, over 1,000 species of butterflies, the endangered bareheaded rock fowl, and other unique animals and plants.

Conservation Work is funded by the European Union (EU), the World Wide Fund For Nature (WWF), Britain’s Overseas Development Administration (ODA), besides the German Bank of Development and Reconstruction (KFW), and supported by the Nigerian Conservation Foundation (NCF). But severe problems loom. CRNP comprises the northern Okwangwo and the larger southern Oban Hills divisions. These are surrounded by a two-kilometre wide support zone where small scale sustainable income-generating activities by local villagers are encouraged. But the arrival of large Asian and European logging companies with “heavy machinery and deep pockets” is posing a severe threat.

The largest is Hong Kong’s Western Metal Products Company Limited (WEMPCO), which has sizeable logging concessions in the park’s buffer zone and on its boundary. Its enormous mill under construction would alone demand much more timber than the state can sustainably offer, besides profits seem extortionate.

Ben Arikpo, chairman of the local NGO Coalition for the Environment spearheading opposition, explained the deal. Logging companies pay the Cross River State government the equivalent of a US$28 stumpage fee for a mature mahogany tree. This can be sold overseas for more than $30,000. Smaller trees attract fees of about $10 but fetch $25,000 abroad.

An official of the Cross River State Forestry Department confirmed it is illegal to export Nigerian timber. “However”, he added, “we are aware that the logging companies are exporting it, and that the Federal Department of Forestry charges them for the export of finished products.”

The state’s officials seem to feel that the major logging companies will provide the roads and development that the underdeveloped state badly needs and people want. “WEMPCO has come in with development projects and now we will have employment for our people and the cash flow will improve,” declared the State Commissioner for Agriculture, Mr. Ogar Francis Afufu. “We believe that the state government has struck a balance between development and the environment.”

About seven years ago the then government made Cross River State’s capital city, Calabar, the first of four “centres of rapid industrialisation”. Unfortunately, logging concerns are among the first taking advantage of the Export Free Zone (EFZ).

Mr. Odey Oyama, coordinator of Ikon Conscience, a local environmental NGO, said that his organisation was initially favourably disposed towards WEMPCO because of promised jobs. But when it planned to process hardwoods at its River Cross bridgehead factory, he became worried about future effluent disposal. Some three million people in Ikon, and 300 downstream communities, depend on the River Cross for their survival.

Apparently WEMPCO did not get the government’s mandatory clearance of its factory’s building plan, or an Environmental Impact Assessment (EIA) approved by the Federal Environmental Protection Agency (FEPA). Besides, the company’s previous operations in Ogun State led to a number of brushes with the state government.

Although WEMPCO claims there is an orchestrated attempt to discredit it because it is a Chinese company, its spokesperson, Andrew Choi, admitted to the Press that WEMPCO logged more species of wood than it was authorized in Ogun State, and was asked to leave a Biosphere Reserve. He also admitted the company had logged undersized trees because all the mature trees were already gone.

Environmental NGOs in Cross River State, with the support of the NCF, WWF, the Civil Liberties Organisation, and the FEPA are determined to prevent similar environmentally unfriendly business practices in Cross River State. They have forced WEMPCO to explain its proposed industrial activities in court before operations commence. NGOs claim the company initially said it would produce ceramics, then asbestos, and now wood products at its factory.

These NGOs are also fearful of physical retaliation. The CRNP manager’s house was broken into by unidentified robbers in January 1996. John Barker, WWF’s project manager at Cross River National Park, was threatened and had advertisements in the local Press accusing him of trafficking gorillas.

However, Munen Ojong Ndoma Egba, the ruler of Akparabong (a village near Ikom, the site of WEMPCO’s factory) and head of Ikom’s Council of Chiefs, declared impatiently, “WEMPCO should start its operations so people can have employment. We want development.” He added that NGOs should monitor pollution and stop WEMPCO operations if it occurs. Late last year, the state government reacted to public and Press criticism by reviewing the companies’ logging concessions, and called a meeting of all concerned stake-holders. But the fact is the community and state could do quite well if it sustainably exploited the mimusop (Sapotaceae) tree.

Its edible oil is richer and sweeter than commonly used palm oil. The stumpage fee for mimusops is about $26. The oil tapped annually from one tree sells for between $47 and $58.

“The villagers ‘insurance policy’ is the sustainable use of non-timber forest products such as mimusop oil,” observes John Baker. “This is their only resource that gets more valuable every year.”

“Rather than adopt the suicidal measure of granting logging concessions without proper environmental impact assessments, the Cross River State Government must do all that is necessary to conserve its rich forests,” concludes Dr. Ako Amadi, the Nigerian Conservation Foundation’s technical director. “The government could also develop a market for non-timber products, charging research fees, and tapping into the ecotourism potential of the park.”