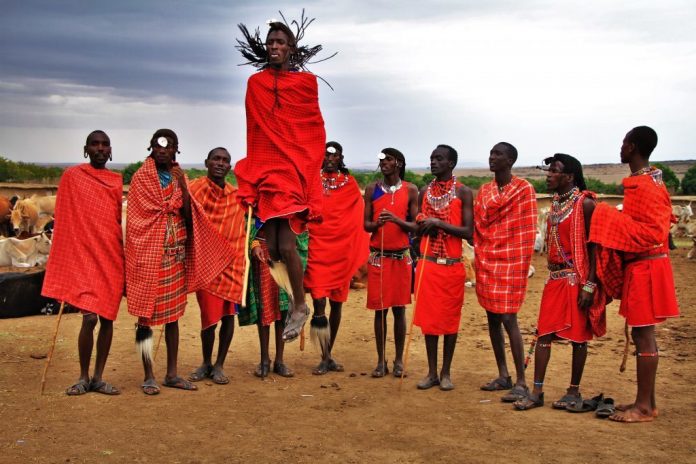 One is wooden and the other made of flesh and blood. However, sometimes it is difficult to tell the difference. They both stand on the left leg, the right foot effortlessly hooked on the crook of the knee of the other. They spot long ochre-dyed hair and red sheets as the only attire on the body. A spear in the right hand and a stern face complete the picture.

One of them is a carving of a Maasai man and the other is a living member of the Maasai community and, in this case, the difference between the two is obscure because they are one thing: merchandise for the tourism industry.

Merchandise must be glamorised so that it can appeal and so it is natural for the Maasai people to be given a glossy finish on post cards and tourist marketing brochures.

In the end, the myth is sold of a warrior and warlike tribe somewhere in Africa. The tribe’s male live on the hearts of the lions they kill in the sprawling savanna. For a change of diet, they turn to blood and milk.

The myth must be seen in its natural form which is in the wild so the mini buses loaded with tourists armed with whining cameras crisscross Maasai land .

The Maasai on their part have learned that there is a dollar in being merchandise of the curio type. So they turn out in front of their manyattas (kraal) as if in Hollywood. For a dollar, the tourist can both see this creature of the wild and photograph it.

One does not blame the tourist for buying the image for it has been sold to him by the Kenya Government through its tourists offices. The image has been marketed by tour companies, hotels and other tourism merchandising concerns.

The tourist buys an irresistible package of lies that culture is a commodity to be bought and sold in the open market. The same package contains very palatable lies that the only cultures that exist in Kenya are those of the so-called “un-urbanised” tribes.

Culture as a fusion of a people’s way of life is not a commodity. It is an expression of their totality and when taken otherwise, it is hard to tell between them and wildlife. In this case, the Maasai has the same camera value with a buffalo since their lives begin when the camera begins to whine and ends when it is shut down.

Culture is much more dynamic than a moment of a camera flash which is what the exotic image made of the Maasai turns it into. Culture holds the past and present, a blending that the post cards of the Maasai kills.

Culture is dynamic and the Maasai are not exceptional to that rule. The shuka-clad (a red cloth that the Maasai wrap around themselves) Maasai man is at home with a Coke as the urbanised man from Central Province. The eyes of the tourists must, however, be tinted so that they see a tribe caught in a time warp. Anything different would kill the image of the exotic.

The image makers would rather join the politicians who live on the ignorance of the people from that community. They would rather make them believe that long pants belong to the second millennium and not to now. So long as shukas are their only wear the tourists will keep coming.

The big lie that only the “exotic” tribes have a culture worth being seen in Kenya by tourists has of course led to the short changing of visitors. They arrive at the airport, head for the game drives and in the process, they also see the Maasai and their manyattas. After hopping from park to park and manyatta to manyatta, it is time to head back home.

There is no time to watch the culture of Luo football fans; the culture of nyama choma; the fisher man’s culture and that of the clay pot maker. There isn’t a moment to listen to that Shauri Moyo band that plays benga or watch an African play at Miujiza Theatre.

All those and others are facets of Kenyan culture and pretending that they are not only serves to give the tourist a half baked view of Kenya. It is like taking a Kenyan tourist to Trafalagar Square, showing him or her the crowd there, photographing the feeding of pigeons and then loading the visitor back into the plane.

The Maasai and the Big Five are certainly faces of Kenya. However, to take them to be a composite of Kenya is a lie that should stop. To take the Maasai and the Big Five as being the same is to insult a people. It is an insult that has continued for long but its life must end in the minds and acts of those who think of tourism as an affair that deals with people other than commodities.

It is all a matter of understanding that culture is not a plastic thing. It is about real life.