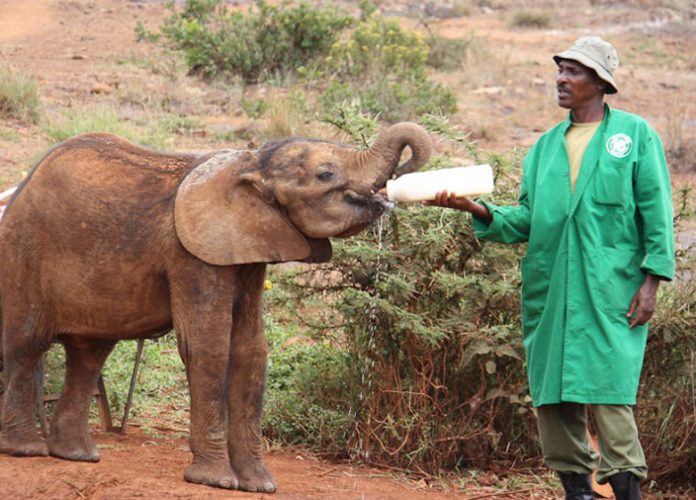 One of Africa’s best publicized conservation problems is how to save its magnificent elephants. Habitat destruction and illegal hunting for ivory have dramatically depleted some populations. But now another major threat to the animal has surfaced. Increasingly, the African elephant has become a source of fear and dread because of the danger it poses to crops, and more seriously human life. Perchyderms seeking diminishing sources of food stray into farmland and inhabited areas. Farmers can lose all their possessions and even members of their families.

“I can’t get any sleep during the planting season,” laments Hilaire Manga , Chief Wildlife Guard for the Far North Province of Cameroon. “The farmers want all the elephants killed.” Elephants also pose a threat to conservation efforts: the prolonged stay of an increased number of elephants in Cameroon’s Kalamaloue National Park is causing considerable damage to natural vegetation. In 1992, the animals destroyed 44 per cent of the park’s trees.

Elephant damage to acacia trees in northern Cameroon’s Waza National Park (1,700 km2) is not yet classified as “serious”. But if the trend continues, it could be.

This park is home to one of the largest perchyderms (1,100 individuals) of the Sudano-Sahelian region. The northern population migrates northwards for the dry season (December-May). Another group spends the whole year inside the park. Elephants in the central and southern part move southwards as the rains hit.

The arrival of elephants on the outskirts of villages located as far as 120 km south of Waza arouses sheer terror. Residents view elephants with suspicion, hostility, and resentment. A survey by Martin Tchamba indicated that 23 per cent of respondents lost their entire annual harvest of mainly millet and maize during night incursions in 1992, and 27 per cent in 1993. The total estimated crop lost increased from US$77,950 in 1992 to US$127,620 in 1993 in the villages surveyed.

“Knowing what to do with elephants in this part of the country is causing headaches,” observes Albert Dourga, wildlife guard at Mindif. “A traditional ruler once visited us with a message. He said that the administrative officer had ordered that all elephants in his village be killed. Of course, it was a lie. But it wasn’t an easy matter for us not to immediately act on the request of a high official.”

This has serious implications for elephant conservation. Solutions will simply not come from more anti-poaching efforts, fences, or culling. More important is raising awareness of the sources of the man-elephant conflict, and understanding elephants’ migration patterns and food habits. Some work has already been done. In January 1993, researchers from Cameroon’s Centre for Environmental Science and Development (CEDC) and Garoua Wildlife School outfitted one elephant with a radio satellite collar, and a second with a radio collar.

Through two weather satellites, researchers in Cameroon and other scientists at the Dutch Centre for Environmental Science (CML) in Leiden, Holland, could track the Waza elephants year-round, even in areas where conventional radio telemetry was of limited use. Monitoring stopped in September 1995 because of animal deaths or malfunctioning batteries.

Nevertheless, it was found that the home range size varied from 785 km2 for permanent residents, to 3,066 km2 for migrants that moved north during the dry season. Animals going south during the wet season required a range of 2,484 km2. In October, 1995, the World Wide Fund For Nature (WWF) joined efforts being carried out by the CEDC, the CML, and the World Conservation Union/Waza Logone Project. One of the activities WWF initiated was a study of elephant migration patterns and home ranges in the Mayo Kani (Cameroon) and Mayo Kebbi (Chad) areas. The guiding principle being that greater knowledge of elephant behaviour will reduce the damage they cause – especially during the planting and harvesting seasons.

In January 1996, as part of this study, a female elephant was fitted with a radio satellite collar. Its movements will be regularly monitored. The Park and Wildlife Services have been informed so they can prepare an effective elephant-deterrence strategy.

The challenge of influencing elephant migrations in order to bring farm-elephant conflicts under control is enormous. The results of the on-going field research will hopefully enable the wildlife department to address the conflict.