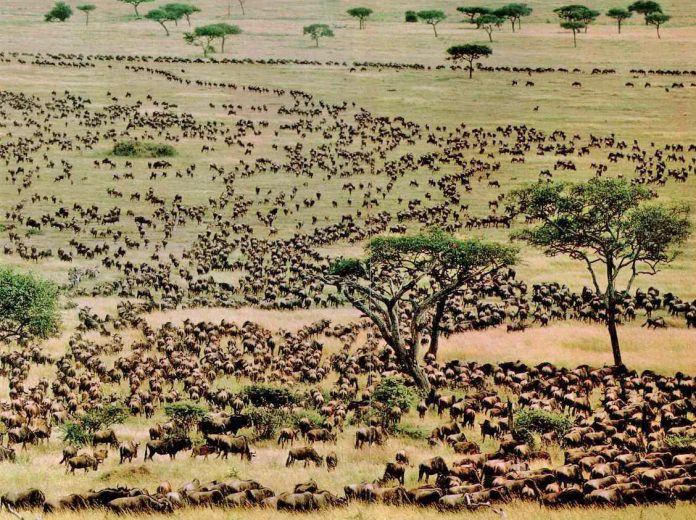 Serengeti National Park sprawls within the endless plains of Tanzania and incredibly one of the famous game sanctuaries in the world. It is set between Mara and Simiyu regions, and given its strategic location, it is popular for its annual wildebeest migration. Serengeti National Park became a national park in 1951 making it one of the oldest national parks in Africa. In 1979, it was designated as a UNESCO World Heritage Site and sits in an area of about 15000sq.kms.

The Serengeti Ecosystem is composed of lakes, woodlands, grassland plains of Ndutu in southern Serengeti and covers some parts of the northern verdant river expanse and the Masai National Reserve.

To many, a safari in Serengeti is a dream adventure that travelers seek from Africa. That is the reason as to why Serengeti is included in most trips in East Africa. One of the best trips is a 10 Days Tanzania Rwanda Safari featuring classic game drives in the Serengeti and the amazing gorilla trekking experience in the Volcanoes National Park of Rwanda featuring stays in the unrivaled Singita Collection of eco-lodges and exclusive camps.

Activities to do in Serengeti National Park

Game drives are the best way for visitors on Tanzania safari to explore and experience the Serengeti National Park. It is open to visitors throughout the year and exploring its vast plains gets you a chance to see diversity of wildlife species including cheetahs, leopards, buffaloes, giraffes, elephants, Thomson’s gazelles, zebra, rhinos, elands, impalas, topis, birds and many more.

Wildebeest migration is an unusual wildlife experience you shouldn’t miss while on Tanzania safari in the Serengeti National Park. This occurs from June to October where huge concentration of wildebeests plus the Thomson’s gazelles, zebras move from the Tanzania’s Serengeti National Park to Masai Mara National Reserve of Kenya.

When to visit Serengeti National Park

Visitors on Tanzania safari can visit to Serengeti National Park throughout the year. However, depending on your travel interest, to witness the wildebeest migration, the best months to visit Serengeti is from June to October which is also dry season that is ideal for game drives. Bird watching is ideal starting March to April and November when most migratory birds confine in this national park.

Where to stay in Serengeti National Park

How to get to Serengeti National Park

Visitors on Tanzania safari can reach Serengeti National Park beginning from Arusha Town. You can take a flight from Kilimanjaro International Airport which is 46kms away from Arusha Town or Julius Nyerere International Airport. You may also opt for domestic and charter flights conducted by Coastal aviation to Serengeti National Park, Auric Air, Precision air, Air Tanzania  and many others.

Why Zimbabwe is the Perfect Destination for Walking Safaris