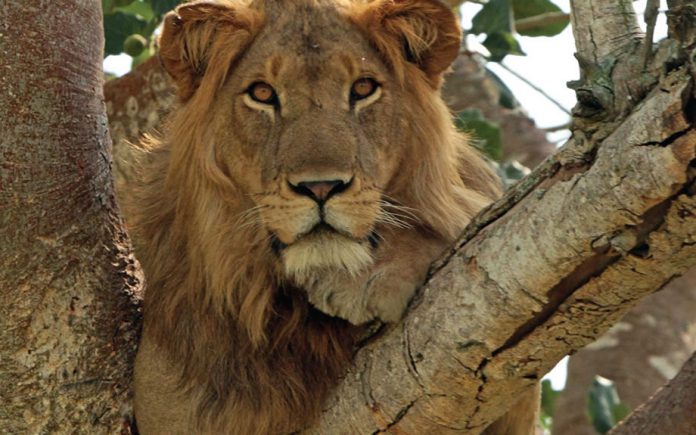 Queen Elizabeth National Park lies on the border of Uganda and the Democratic Republic of Congo and was originally named the Kazinga National Park. The park borders the Virunga Mountains to its west and offers spectacular views of these ancient volcanoes across Lake Edward. It’s in the Southern Ruburizi area that our Ishasha Wilderness Camp is idyllically placed.

Overlooking the Ntungwe River, Ishasha Wilderness Camp has been built to blend into the surrounding bush and offers travellers an escape from the hustle and bustle of many of Africa’s large hotel style lodges, while still offering the luxury you would expect from a Wild Frontiers tented camp.

What is there to do in the area?

While we are of the opinion that a day in Africa can be very well be spent relaxing with a drink in hand, watching resident elephants play in the river, we know most travellers prefer to fill almost every second of their day with some sort of activity. Luckily, there’s a lot to do here – so make sure you wake up early to fit all of it in.

Uganda’s flag has the image of their national bird, the crested crane, and the country really is bird crazy. Over 1,000 species of birds can be found from Lake Victoria to the Rwenzoris and the Queen Elizabeth National Park is a true bird lover’s paradise. The top pick for any aviary enthusiast is, of course, the bizarre and prehistoric looking shoebill stork (pictured below). The narina trogon and black bee-eaters are two of the rarer bird species which can be sighted at our camp.

The Ishasha region is not just beautiful, but one of the few places in Africa where the lions climb high into the branches of the large resident fig trees. There are many theories as to why this happens, but most people agree it’s for better vision over the long elephant grass of the area and to escape the painful bites of flies. Luckily, with our camp nearby our guides have learned exactly which trees the lions prefer and we see them frequently on safari.

Safaris with our expert guides

Ishasha Wilderness Camp is equipped with open game drive vehicles and has a nearby airstrip so a fly-in safari as part of your greater Uganda adventure is highly recommended. The area is home to four of the Big Five, plenty of antelope and many smaller creatures.

At Ishasha, we realise that nothing would be possible without the amazing people of Uganda and so we offer trips to see the local communities and interact with them. Eating traditional food and learning about the healing power of the area’s plants are just two exciting day trips we offer for the socially conscious traveller.

Chimpanzee tracking in the Kyambura Gorge

Look high into the trees and listen intently as you explore the Kyambura Gorge in search of our closest animal relative. The region (in the north of the park) is famous for its chimpanzee trekking, but in the nearby forest you may be lucky enough to see these highly intelligent creatures or hear their calls as the sun dips below the horizon.

The Kazinga Channel is a short but wide stretch of water linking Lake George and Lake Edward. It is home to one of the highest densities of hippos in Africa. Our favourite activity on the channel is the relaxing boat trip where many large animals and exquisite birdlife can be spotted whilst sipping on an ice-cold drink. Large herds of elephants drinking and bathing in the channel are a common sight as are buffalo and the many species of nomadic birdlife that frequent the area.

Just relaxing at our camp

In the Ishasha region we were lucky enough to find a piece of paradise. Nestled on the Ntungwe River we’ve put up 10 luxurious en-suite canvas ‘rooms’. Venturing out of the tent you may see Harry the hippo who is known to graze on the camp’s grass or, if you’re lucky, a herd of elephants bathing in the nearby river. Our restaurant allows you views down the river and many people prefer to eat al fresco.

Sundowners can be arranged either along the ridge area or beside the Ntungwe River to allow guests to savour the vast vistas and atmosphere of this beautiful area of the park. Bush breakfasts are also a highlight, with your own personal chef and dining table set-up in the wilderness.

Wild Frontiers is proud to announce a pay for 3, get your 4th night FREE deal for our camp and lodges for travel in April, May and June 2017. Book your nights at our properties of Ishasha Wilderness Camp, Baker’s Lodge (in Murchison Falls National Park) or Buhoma Lodge (in Bwindi, home of the Mountain Gorillas) and get every 4th night FREE for travel in the months of April, May and June 2017. Contact reservations@wildfrontiers.com to have us design you the perfect Ugandan holiday today!

Check out one of our 4th Night Free deals here.