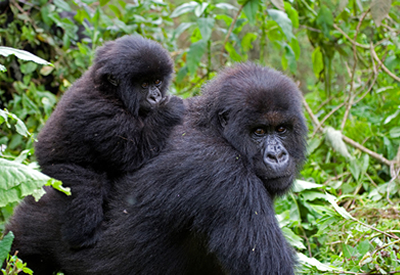 The four best places to trek gorillas in Africa are Bwindi Impenetrable National Park, Mgahinga Gorilla National Park, Volcanoes National Park and the Virunga National Park. Every gorilla destination has a unique experience to offer to visitors on gorilla trekking safari that is why a visit to any of them a worth the money, efforts and time. Gorillas are a few unique creatures on planet and trekking to see them in the wild is truly the most thrilling experience of a lifetime! Trekking gorillas in Africa involves an in-depth exploration of their behaviors, body gestures and photo shooting which rewards trekkers with lots of lasting memories.

Bwindi Impenetrable National Park is one of the best places to trek gorillas in Africa. It is an exceptional gorilla destination to visit to trek mountain gorillas in Africa. This park is set suitably in Southwestern Uganda, approximately 9-10 hours’ drive if you are starting your journey from Entebbe or Kampala and 3-4 hours’ drive starting from Kigali.  Bwindi Impenetrable National Park was gazetted in 1991 and in 1994, it was designated as a UNESCO World Heritage Sites a few of which exist in Uganda. It sits in an area of about 160sq.kms and largely comprised of a tropical rain-forest.

Bwindi Impenetrable National Park is undoubtedly a home to the largest mountain gorilla population. Over 459 mountain gorillas are all confined within Bwindi alone making it one of the premier gorilla trekking destinations in Africa. This represents about half of all the 1063 mountain gorillas that still live in the world. In 219, Bwindi Impenetrable National Park was voted by CNN as the best place to be in the world. Trekking to see mountain gorillas in Bwindi National Park is amazing the fact that visitors have all the four regions to make their dreams come true and they include Buhoma in the North, Ruhija sector in the East, Nkuringo and Rushaga sector in the South. Each of these sectors feature habituated groups for visitors on gorilla safaris in Uganda to trek. They include Mubare, Habinyanja, Katwe, Rushegura (Buhoma sector); Bitukura, Mukiza, Oruzogo, Kyaguriro (Ruhija sector); Christmas, Nkuringo, Bushaho (Nkuringo); Bweza, Bikingi, Mucunguzi, Kahungye, Nshongi, Rwingi, Kutu, Busingye and Mishaya (Rushaga sector).

Mgahinga Gorilla National Park is set in Southwestern Uganda and it is the second-best place to trek mountain gorillas in Africa. It is a magical gorilla destination to visit to trek gorillas in Africa especially for visitors who prefer destinations with less crowds. This park was gazetted in 1991 and it sits in an area of about 33.7sq.kms making it the smallest of all the 10 national parks in Uganda. Despite its size, Mgahinga is by far one of the best places to trek gorillas in Africa. Gorilla treks in Mgahinga Gorilla National Park start from Ntebeko Visitor Center with an early morning briefing. Only Nyakagezi gorilla family is the only habituated gorilla family set for visitors on Uganda gorilla trekking safari to explore in Mgahinga Gorilla National Park.

The habituated gorilla families in Rwanda’s Volcanoes National Park include Susa A, Bwenge, Hirwa (which migrated into Uganda’s Mgahinga Gorilla National Park), Sabyinyo, Karisimbi (Susa B), Kwitonda, Umubano, Amahoro, Agashya (Group 13) and Ugenda. Note each habituated gorilla family has a unique story and so a rare experience for trekkers on gorilla trekking safari.

Visitors planning to visit Volcanoes National Park to trek mountain gorillas will need $1500 to book gorilla trekking permit in Rwanda. You can secure your permit in advance through our reservation team or directly through the reservation team at Rwanda Development Board (RDB).

The Virunga National Park is remarkably one of the four best places to trek gorillas in Africa. This national park is situated in Eastern Democratic Republic of the Congo (DRC) and it was gazetted in 1925 which makes it one of Africa’s oldest parks. It sits in an area of about 7800sq.kms and forms part of the vast Virunga Conservation Area which also covers Mgahinga Gorilla National Park in Uganda, Volcanoes National Park in Northwestern Rwanda. A visit to this park for gorilla trekking safari allows you to strike your imaginations with the habituated mountain gorilla family while in their natural habitat. Virunga National Park is a home to about 300 mountain gorillas which makes it one of the exceptional places to trek gorillas in Africa.

Kahuzi Biega is a national park located in the eastern park of DRC famous for the Lowland gorillas.

The less known Kahuzi Biega National Park is located in western province of the democratic republic of Congo in Bukavu town and it is neighboring the western bank of Lake Kivu near the Rwandan boarders. The park covers an area of 6,000 square kilo meters (2,300 sq. mi) and it is believed to be one of the largest national parks in the democratic republic of Congo. The park is established in hilly and lowland territory.it is one of the latest havens of the endangered species of lowland gorilla (Gorilla Beringei Graueri) the scarce group of gorillas under the IUCN Red List.